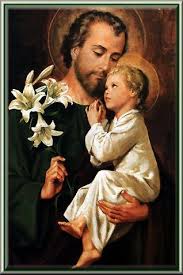 Everything we know about the husband of Mary and the foster father of Jesus comes from Scripture and that has seemed too little for those who made up legends about him. We know he was a carpenter, a working man, for the skeptical Nazarenes ask about Jesus, “Is this not the carpenter’s son?” (Matthew 13:55). He wasn’t rich for when he took Jesus to the Temple to be circumcised and Mary to be purified he offered the sacrifice of two turtledoves or a pair of pigeons, allowed only for those who could not afford a lamb (Luke 2:24).

Joseph is the patron of the dying because, assuming he died before Jesus’ public life, he died with Jesus and Mary close to him, the way we all would like to leave this earth. He is also patron of the universal Church, fathers, carpenters, and social justice.
We celebrate two feast days for Joseph: March 19 for Joseph the Husband of Mary and May 1 for Joseph the Worker. 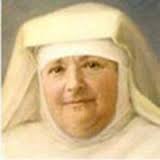 Blessed Mary of the Passion

The Blessed Mary of the Passion, F.M.M. (21 May 1839 – 15 November 1904) was a French Religious Sister and missionary, who founded the Franciscan Missionaries of Mary, currently one of the largest religious institutes in the Catholic Church, in British India in 1877. She was born Helene-Marie-Philippine de Chappotin in 1839 in Nantes, then in the Department of Loire Inférieure, part of the region of Brittany.As a child she displayed an intense religiosity with an introspective and questioning mind. The death of her two sisters and a beloved cousin effected her deeply and drove her to seek the meaning of life, guided by the strong beliefs of her mother. During a spiritual retreat in April 1856, she had a deep experience of God’s love and a call to serve God, which was to guide her for the rest of her life. She was beatified on 20 October 2002, observed that year as World Mission Day in the Catholic Church.

Maria Assunta Pallota was born on 20th August 1878 in Force, in the region of the Marches in Italy in the poor family. She shared the simple, poor life of hard work of her milieu and her family.
At the age of twenty, she joined the Institute of the Franciscan Missionaries of Mary. On the 13th of February 1904, she made her final commitment to God and was sent to China as a missionary. There, she died on the 7th of April 1905 due to typhus.
She was beatified on 7th November 1954 by pope Pius XII.  Her liturgical feast is celebrated on 7th November. 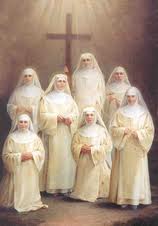 On 8th July, the Church and our Institute celebrates the liturgical feast of St. Marie Hermine and her Companions, seven young FMM sisters, massacred in China, on 9th July 1900, in Taiyuan-fu. Coming from diverse family situations and four different countries, they met in the family of the Franciscan Missionaries of Mary. Together, on 12th March 1899, they left the Port of Marseilles for China. Having arrived at Taiyuan-fu, in the region of Shanxi on 4th May, with faith and courage they endured the sacrifices necessary to adapt to a new environment. A year after their arrival, the Boxer Rebellion erupted. Among others, one of its consequences was the massacre of the entire mission of Taiyuan-fu: two bishops, several missionaries, a group of Chinese Christians and the entire community of FMM sisters. Marie Hermine and her companions were beatified in 1946 and canonized in 2000, together with other martyrs of China. 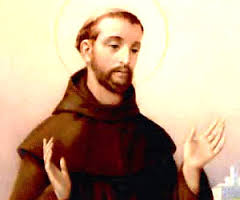 St. Francis of Assisi (Italian: San Francesco d’Assisi) abandoned a life of luxury for a life devoted to Christianity. He was born Giovanni di Pietro di Bernardone, but nicknamed Francesco (“the Frenchman”) by his father, (1181/1182 – October 3, 1226)  and was an Italian Catholic friar and preacher. He founded the men’s Order of Friars Minor, the women’s Order of St. Clare, and the Third Order of Saint Francis for men and women not able to live the lives of itinerant preachers followed by the early members of the Order of Friars Minor or the monastic lives of the Poor Clares. Though he was never ordained to the Catholic priesthood, Francis is one of the most venerated religious figures in history.
In 1223, Francis arranged for the first Christmas manger scene. In 1224, he received the stigmata, making him the first recorded person to bear the wounds of Christ’s Passion. He died during the evening hours of October 3, 1226, while listening to a reading he had requested of Psalm 140. On July 16, 1228, he was proclaimed a saint by Pope Gregory IX. He is known as the patron saint of animals, the environment, and is one of the two patron saints of Italy (with Catherine of Siena). It is customary for Catholic and Anglican churches to hold ceremonies blessing animals on his feast day of October 4.[7] He is also known for his love of the Eucharist, his sorrow during the Stations of the Cross, and for the creation of the Christmas creche or Nativity Scene. 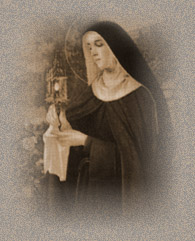 Saint Clare of Assisi (sometimes spelled Clair, Claire, etc.) (July 16, 1194 – August 11, 1253), born Chiara Offreduccio, is an Italian saint and one of the first followers of Saint Francis of Assisi. She founded the Order of Poor Ladies, a monastic religious order for women in the Franciscan tradition, and wrote their Rule of Life—the first monastic rule known to have been written by a woman. Following her death, the order she founded was renamed in her honor as the Order of Saint Clare, commonly referred to today as the Poor Clares.
St. Clare was born in Assisi, the eldest daughter of Favorino Scifi, Count of Sasso-Rosso and his wife Ortolana. On August 9, 1253, the papal bull Solet annuere of Pope Innocent IV confirmed that Clare’s rule would serve as the governing rule for Clare’s Order of Poor Ladies. Two days later, on August 11, Clare died at the age of 59. Her remains were interred at the chapel of San Giorgio while a church to hold her remains was being constructed. Pope Pius XII designated her as the patron saint of television in 1958, on the basis that when she was too ill to attend Mass, she had reportedly been able to see and hear it on the wall of her room.
In the Tridentine Calendar, her feast day is celebrated as a Double on August 12, the day following her death, as August 11 was already assigned to Saints Tiburtius and Susanna, two third-century Roman martyrs. It was changed to a Third-Class Feast in 1960 (see General Roman Calendar of 1962). The 1969 calendar reform removed the feast of Ss. Tiburtius and Susanna from the calendar, allowing St. Clare’s feast to be celebrated on August 11, as a Memorial. Although her body is no longer claimed to be incorrupt, her skeleton is displayed in Assisi. 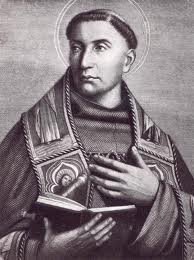 Saint Bonaventure, O.F.M. (Italian: San Bonaventura; 1221 – 15 July 1274),[1] born Giovanni di Fidanza, was an Italian medieval scholastic theologian and philosopher. He was born at Bagnoregio in Latium, not far from Viterbo, then part of the Papal States. Almost nothing is known of his childhood, other than the names of his parents, Giovanni di Fidanza and Maria Ritella. He entered the Franciscan Order in 1243.
Known as the seventh Minister General of the Order of Friars Minor, he was also a Cardinal Bishop of Albano. He was canonised on 14 April 1482 by Pope Sixtus IV and declared a Doctor of the Church in the year 1588 by Pope Sixtus V. He is known as the “Seraphic Doctor” (Latin: Doctor Seraphicus). Many writings believed in the Middle Ages to be his are now collected under the name Pseudo-Bonaventura.